1. 2015 Year-In-Review: Live Music Preliminary numbers suggest that the largest component of the music industry may have continued its strong run in 2015, perhaps increasing by as much as 10% if preliminary reports are any indication.

Pollstar says that the top tours of 2015 include Taylor Swift, AC/DC, One Direction, U2 and Foo Fighters were the top earners.  Plenty of commentators have problems with Pollstar's list, though.

Our post last September may interest those looking for deeper analysis: 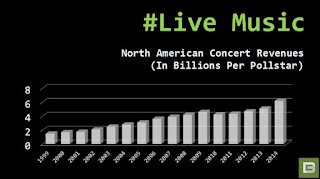 2. 2015 Year-In-Review: Recorded Music
Preliminary reports from Nielsen and Billboard in 2015 were positive, showing streaming revenues continued to rise and and download sales fell in most genres.  Physical sales are mostly down, with a few exceptions (e.g., vinyl sales are up and WMG reports rising physical sales). (FYI, global recorded music sales totaled about $15 billion in each 2013 and 2014 according to IFPI.)

2015 was an especially good year for the growing sector of sound recording performance royalties. Major developments include:

Our post last October may interest those looking for deeper analysis:

Other 2015 notable record industry news includes:
See also our rather uncurated listicle of damages news with which our readers engaged:

3. 2015 Year-In-Review: Music Publishing
Globally, the latest figures from CISAC showed 2.4% growth to about about $9.2 Billion USD during 2014 (based on an estimated average exchange rate from Euros to Dollars of 1.329). Almost $8 in $10 global publishing revenue dollars represent performing rights license fees.

However, in the United States, The National Music Publishers' Association (NMPA) revealed in 2015 that domestic revenues fell 2.5% in 2014 to $2.15 billion.

Domestically, about $5 of every $10 publishing revenue dollars represent performing rights license fees.  While "performance" and "other" revenues are growing, highly government-regulated "reproduction" revenues continue to melt away, representing a mere fraction of what sound recording copyright holders are able to collect via free market licensing.

Also, publishers aren't happy with the Department of Justice's position that any rightsholder can issue a license for 100% of a copyright. (See also The NY Chapter of the Association of Independent Music Publishers (AIMP)'s 2015 program on the difference between fractional and 100% licensing and SONY/ATV's Martin Bandier's letter).

Thus, publishers led by associations including the NMPA and the AIMP continued to seek in 2015 deregulation of both performance and reproduction licensing and royalty rates. For more details, check out Billboard's Cheat Sheet for Copyright Reforms: Radio Royalties, Simplified Licensing and More.

However, the music industry - especially the music publishing sector - does not have much funding to lobby lawmakers in Washington D.C.  During a talk at the Association of Independent Music Publishers (AIMP), NMPA's David Israelite pointed out that all songwriter and publisher groups combined spend only about one fortieth of the amounts that the MIC coalition spends on lobbying. 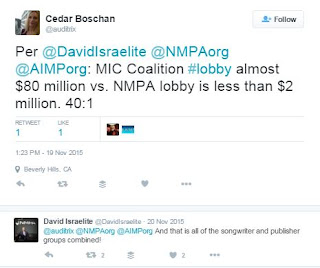 Speaking of the NMPA, 2015 was the end of an era for the organization, which sold its mechanical licensing and collection arm - The Harry Fox Agency - to SESAC, a performance rights organization which is not directly subject to the consent decrees under which ASCAP and BMI operate.


See SESAC CEO John Josephson's vision for expansion in this article and this video. (The latter video is free to AIMP members, in which AIMP lunch attendees questioned Spotify's PDF statement formats to payees of non-HFA clients, which are inordinately expensive to process.  Also, certain audience members expressed dismay over the appearance of a conflict in HFA's audit of Spotify on behalf of HFA clients who pay HFA an 11.5% commission, in light of the fact that Spotify is itself HFA's client).

SESAC is but one example of the evolution in the music publishing rights marketplace. As another example, Kobalt, which has expanded into performance royalty collection, made a similar move in 2015, acquiring from Sindee Levin her US mechanical collection society, AMRA, a small HFA competitor.

In terms of judicial activity, some of the key music publishing cases this year include:

Many more copyright and music publishing cases appear on our rather uncurated listicle of damages news with which our readers engaged in 2015:

Posted by Cedar Boschan at 1:32 PM